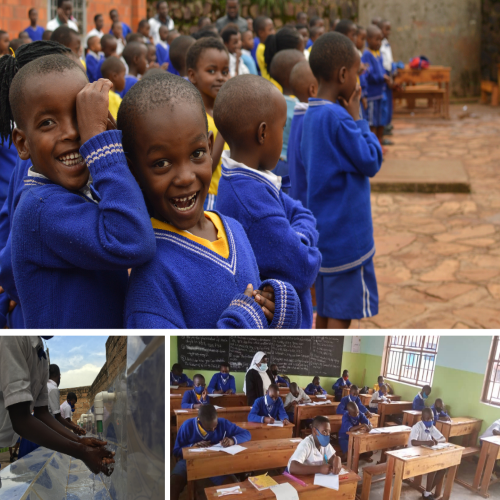 For over three years Cofle has been supporting the association Movimento Lotta Fame Nel Mondo. Since 1964, MLFM fights against poverty in the South World countries.

Their mission is as clear as hard to achieve: no death due to lack of water or food. Their goals include good health and hygiene conditions, childhood, digital divide, integration, social inclusion, agriculture and rural development.

In 2017 Cofle decided to support a specific project: a school In Rwanda, the Primary School Mother of Providence, directed with passion and love by Sister Odile.

After the so-called “Genocide of one hundred days” in 1994, many children have been orphaned; the MLFM decided so to build a primary school in Muhura, where almost 400 children were given the possibility to go to class and have fun growing in a healthy and educational environment.

Projects which support structures such as the Muhura school are of fundamental importance, especially following a government law of a few years ago which has led to the closure of all orphanages in Rwandan territory. Without these alternative structures, orphaned children would be forced into a street life.

Unfortunately, even the Primary School Mother of Providence has been impacted by the pandemic. Since the beginning of 2020 many similar activities have been forced to close or remain open only under the strictest terms and restrictions.

For several months the Muhura School had to close due to the infections that, although contained, increased; but Sister Odile, the head of the School, never completely closed the doors, helping many mothers who asked for food for their families.

Having access to running water was one of the conditions imposed by the authorities̀ to allow the reopening of the school: the only way to have hygiene and health guaranteed. In the last months, with a boost to the works in the water distribution system, the water has arrived at fountains’ school; together with the distribution of Personal Protective Equipment young students were gradually allowed to return to school.

Cofle strongly supports education, in Rwanda as well as in Italy. It has always been active alongside voluntary associations in the local territory and promoted the education of children and adults in need.